Catterall & Ors v Moreton Bay Regional Council & Anor
[2020] QPEC 52
To print this judgment please return to the case and click on the PDF icon next to the case name. For court use, a full PDF copy is required or preferred.

PLANNING AND ENVIRONMENT COURT OF QUEENSLAND

The land and surrounding locality 3

The changes proposed to the approved plans 8

Planning issues arising for consideration as a consequence of the changes15

Jurisdiction and the onus of proof 15

Other alleged non-compliances with the planning scheme 34

Exercise of the discretion 37

The land and surrounding locality

“Urban neighbourhoods include existing low density suburbs…on the Redcliffe Peninsular that have the attributes and capacity for change to more walkable, compact and sustainable communities…

These areas will be targeted for change over time. These are places that now or in the future will be within easy walking distance of an Activity centre and/or to frequent public transport that can convey people in a short period of time to an Activity centre and to important transport nodes that link with other places quickly and regularly. These places also have an underlying structure that allows for change to occur. This structure has a permeable and legible street network, or potential for one to be developed, to support redevelopment to higher densities. The age of its building stock and the layout and size of the lots in these areas will facilitate this change…

Increasing the residential density in these areas will be encouraged to increase the local resident population, to support a greater range of local businesses, particularly in Activity centres and encourage the use of public transport. Increased residential densities will help support a balanced mix of other uses including schools, local shops and offices, child care centres, community and health facilities, open space and recreation facilities. The minimum land use intensity across Urban neighbourhoods is 60 people and/or jobs per hectare (for people this equates to a minimum net residential density of 30 dwellings per hectare).

“Urban neighbourhoods will be vibrant and attractive places with attractive streetscapes, active frontages facing onto the street and architecturally designed development;”[6]And:

“Development across an Urban Neighbourhood place type has a minimum land use intensity of 60 people and/or jobs per hectare (for people this equates to a minimum net residential density of 30 dwellings per hectare);”[8]

“The Urban neighbourhood precinct provides a mix of dwelling types and sizes with an emphasis on attached dwellings and apartment buildings. Medium to high density neighbourhoods are located within walking distance of a diverse range of services and facilities.”

“24. The building envelopes, and associated apartment balconies, typically follow the alignment of the three road frontages with a predictable curved balcony feature presenting to the south east corner of Gayndah (sic) Esplanade and Lilla Street.

“ 26. From an architectural prospective, the uniform and undifferentiated built form outcome described in paragraph 25 exacerbates the bulk and volume of the building scale.

27. Equally, the consistency of the built form (described in paragraphs 25 & 26), notably the general consistency of building height, has the potential to reinforce the monotony of height and scale of building envelopes within the surrounding context which, read as a whole, may be perceived [as] a ‘wall’ of development.”

The changes proposed to the approved plans

contribute to an articulated and modulated skyline…” And:

“…From an architectural perspective, the Change Application presents as a superior and more desirable design outcome when compared against the Development Approval which shall result in a less intense development including less yield, less site cover and less building volume.

“82 Assessing and deciding change applications for other changes

(b) with necessary changes.”

“(4)  To remove any doubt, it is declared that the following matters apply, only to the extent the matters are relevant to assessing and deciding the change application in the context of the development approval—

(a) the assessment benchmarks;

(d) if the development to which the change application relates requires impact assessment—any matters the assessment must or may be carried out against or having regard to under section 45(5)(a)(ii) or (b).”

“Simply put one bad planning decision should not lead to another bad planning decision. A change application for the changes proposed, effectively requires full assessment against the Planning Scheme and current assessment benchmarks particularly those that relate to density and height. The assessment is not simply against the existing development approval to reach the conclusion it is an improvement and therefore should be approved.” (emphasis added)

To this end, the clause clarifies that only the matters for assessment… that are relevant to assessing the change in the context of the original approval are relevant for the assessment of the change application.

The issues arising as a consequence of the changes proposed

Jurisdiction and the onus of proof

“The P&E Court can not consider a change to the development approval the subject of a change application under the Planning Act, section 78, unless the change is only a minor change to the approval.”

And the subject proposal, you describe as high density residential? … Yes.

So in that sense, what has changed? --- And I… must admit, that was one of the few things I grappled with, is that intrinsically linked with - in context of the approval, there was an approval for high density residential and there still is.

So if it’s high density residential in the approved case and high density in the other than a minor change application, there is no change, is there?... -- No, that’s right. The category of that type of development, if it’s low, medium or high, stays the same …”

“Council will seek to increase residential densities and employment opportunities within the urban corridor and specifically within an adjoining activity centres and public transport in order to maximise access to and use of services and facilities and opportunities for use of public transport, walking and cycling and also adjacent to areas of high scenic amenity e.g. waterfront, environmental areas with high standards of amenity and accessible open space.” (emphasis added)

“This overlay map only affects your property if you wish to develop (e.g. change use, build or extend).

This map shows the height of buildings and structures supported by the planning scheme.

This overlay map assists with interpreting and applying development requirements throughout the planning scheme.

Refer to the relevant zone code, local plan code and development code for requirements associated with this overlay map.”

“to… provide additional information in the form of images and explanatory text to provide guidance about satisfying assessment criteria identified in the planning scheme;

“… the terraced approach to the built form of the Change Application results in a well-considered, highly articulated design outcome which carefully defers to the height of existing adjoining or adjacent neighbours, so as not to be visually dominant or overbearing with respect to the streetscape and presents as a modulated built form within the surrounding context…

In comparison, the Development Approval, with its general consistency of building height, has the potential of being perceived as a uniform and undifferentiated built form (paragraph 25) which shall have significantly greater visual dominance and sense of overbearingness against the lower scale existing built forms adjoining and adjacent the subject land on Kate Street…”

“The development proposed in the Change Application:

(a) improves the extent of landscaping (soft landscaping) along all frontages to the subject land… It will assist to soften the built form and improve the interface of development on the subject land with the adjacent streetscape;

“Recognise and promote landscape values and scenic amenity across the Region.

“…Building design responds to the bayside location and complements the particular bayside character and amenity by adopting and incorporating a range of architectural character elements...”

Other alleged non-compliances with the planning scheme

Exercise of the discretion 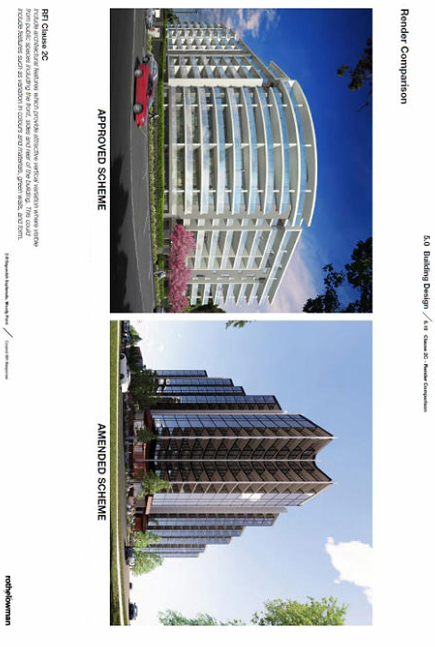 [3]This includes the HMQS Gayundah Shipwreck memorial located at Picnic Point, with the wreck beyond the waterline.

[30]A change application for a minor change.