Garry Neville Teis v Matrix Global Real Estate Pty Ltd, Xiaoyu Dong and Lin Lin Du
[2020] QDC 163
To print this judgment please return to the case and click on the PDF icon next to the case name. For court use, a full PDF copy is required or preferred.

The defence of the First Defendant

Introduction and the agreement

“I’m definitely not doing the lion’s share of the work.  You are correct that I’m definitely needing to be paid for the fulltime job I’m doing for the first defendant.  That’s exactly why it was supposed to be that way.  I do the minimum amount of work and still get 50 percent of the commission.”

He was, with respect, somewhat inconsistent on this issue.

“Viv (Ms Dong) is the New South Wales licensee and as such she is to double check those things.  Bec (Ms Jose) is a fully qualified real estate agent.  She is not just a salesperson.  Once again, she is equal to what I was in qualifications.  And so we’ve got a licensee in charge, we’ve got two licensee salespeople and we’ve got a very devious vendor.”

Evidence in chief – the agreement

“It was not my intention to separate with my business partner and I – as a business owner, a director of the company, I do not plan to fail.  But, when things happen, I have to deal with it.  And, as an owner of the business and my – I’d have a discussion with Lin Du and we offered the salesperson back then – they had the choice to have a discussion with myself or Lin to choose which company they want to work with after this – their agreement with Matrix Global terminated.  That was the best we could do.”

“Conjunction means more than one salesperson – most likely two salespersons.  One is listing agent who is not the seller.  The other one who is finding the buyer.  So they work together to get the deal done and they share the commission.  It’s called conjunction.”[22]

The claim for commissions pursuant to the agreement

It was no doubt the intention and hope of the parties, at the time when the agreement was signed, that the arrangements would continue for three years.  In the event, they did not.  So the first issue, in terms of construction of the contract, is the status of that provision; what was the contractual force of the reference to three years?

Promissory nature of the term?

An  undertaking to trade for three years?

“But it is common ground that the contract imposed an implied obligation each party to do all that was reasonably necessary to secure performance of the contract.  As Lord Blackburn said in Mackay v Dick:

‘As a general rule… where in a written contract it appears that both parties have agreed that something shall be done, which cannot effectually be done unless both concur in doing it, the construction of the contract is that each agrees to do all that is necessary to be done on his part for the carrying out of that thing, though there may be no express words to that effect.’

It is not to be thought that this rule of construction is confined to the imposition of an obligation on one contracting party to co-operate in doing all that is necessary to be done for the performance by the other party of his obligations under the contract.  As Griffith CJ said in Butt v McDonald …:

‘It is a general rule applicable to every contract that each party agrees, by implication, to do all such things as are necessary on his part to enable the other party to have the benefit of the contract.’

It is easy to imply a duty to co-operate in the doing of acts which are necessary to the performance by the parties or by one of the parties of fundamental obligations under a contract.  It is not quite so easy to make the implication when the acts in question are necessary to entitle the other contracting party to a benefit under the contract but are not essential to the performance of that party’s obligations and are not fundamental to the contract.  Then the question arises whether the contract places a duty to co-operate on the first party or whether it leaves him at liberty to decide whether the acts shall be done, even if the consequence of his decision is to disentitle the other party to a benefit.  In such a case, the correct interpretation of the contract depends, as it seems to me, not so much on the application of the general rule of construction as on the intention of the parties as manifested by the contract itself.”

Principles as to Implication of a term

“If it appears from the written contract that a term is to be implied, there are conditions which any proposed term must satisfy.  They were stated by the majority judgment in BP Refinery and adopted by Mason J with the concurrence of the other members of this court in Secured Income Real Estate v St Martins Investments Pty Ltd (supra).  Those conditions are:

‘1. It must be reasonable and equitable;

2. It must be necessary to give business efficacy to the contract, so that no term will be implied if the contract is effective without it;

3. It must be so obvious that ‘it goes without saying’;

4. It must be capable of clear expression;

5. It must not contradict any express term of the contract.’” 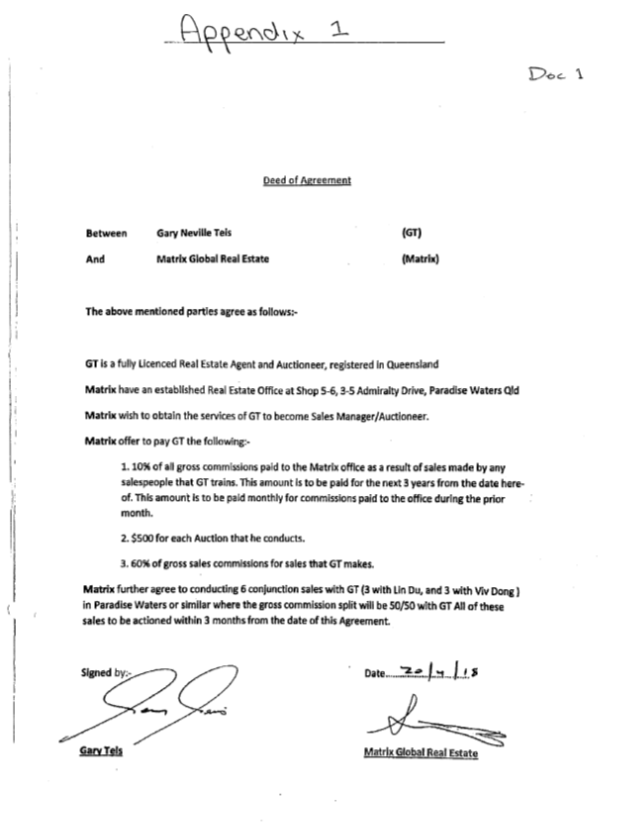 [1]  Of course, this makes no allowance for the normal discounting process to allow for the present value of a future loss; but in the result this has little significance, although it is dealt with below

[2]  Including his written statement prepared for the trial, Exhibit 1, and attachments thereto, as well as his oral evidence

[33]  The court approaches the task of ascertaining the meaning of the term from an objective viewpoint; see Maggbury Pty Ltd v Hafele Australia Pty Ltd (2001) 185 ALR 152 at [11]; Pacific Carriers Ltd v BNP Paribas (2004) 218 CLR 451 at 462; what would the document convey to a reasonable person with the parties’ relevant background knowledge, and the purpose and object of the transaction, at the time?

[34]  The condition under discussion is a condition precedent to performance, not to formation of the contract