R v Koani
[2016] QCA 289
To print this judgment please return to the case and click on the PDF icon next to the case name. For court use, a full PDF copy is required or preferred.
Authorised Reports & Unreported Judgments

and in either case he did so with intent to cause the death of or grievous bodily harm to the deceased.[1]

The judge’s directions to the jury 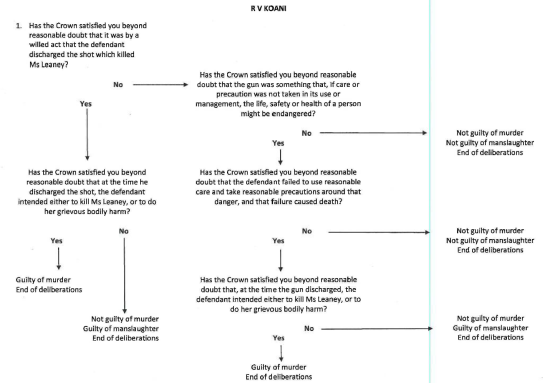 “So the question number 1:

Has the Crown satisfied you beyond a reasonable doubt that it was by a willed act that the [appellant] discharged the shot which killed Ms Leaney?

So what I said about elements before, this is the first of these elements.  The Crown has to satisfy you that there is a willed act, and I will spend a little bit of time talking to you about what does a willed act mean; what does that element mean.  All right.  So that is the starting point.  If you think “Yes, the Crown has satisfied me beyond a reasonable doubt there was a willed act,” you progress down that first column and you come to the second of the elements that you will have to consider, and it is this:

Has the Crown satisfied you beyond reasonable doubt that at the time he discharged the shot, the [appellant] intended either to kill Ms Leaney or to do her grievous bodily harm?

And if you wanted to sum that up in a shorthand sort of way, you would call that intention.

So question number 1 relates to willed act, and then the second question, if you want to think about it in a shorthand way, relates to intention.  Okay.  So if you answer yes to both those questions, you will see where you end up, guilty of murder.  That is the end of your deliberations.  Do you see that on the sheet?  Okay.

If you think, “Yes, there was a willed act.  No, there was no intention,” see where you end up, not guilty of murder, guilty of manslaughter.  So do you see just the flow of that?  All right.

If you think, “Yes, I am satisfied of that,” you go down to the next question:

That is the danger posed by the gun –

Okay.  And you will see, if you compare those two intention questions, that the difference between them is that the one in the first column is predicated on you having found that there was a willed act that discharged the gun, so that the intention question in the first column says “at the time he discharged the shot”, because you found it was a willed act.  But in the second column, by the time you get to the intention, you have had a reasonable doubt about willed act, so you have not found that.  And it just says “at the time the gun discharged”, not that “he discharged it”, because you have had a reasonable doubt about willed act.  Okay.  So that is the overall scheme of it, and I am going now to sort of descend into the detail and talk to you about each of these elements, as they are called.”[44]

So the remaining instructions that I have to give you are about, then, this third question in column 2.  And that is because the Crown says, as I said to you at the beginning, if you are following this through, if you ended up looking at this third question in column 2, you have done it because you had a reasonable doubt about the willed act.  You are satisfied that the gun was dangerous.  You are satisfied there was not proper care taken.  You are satisfied that caused death.  And then the Crown case is, well, if at the time the gun discharged there was an intention to kill or do grievous bodily harm, that still results in a murder conviction.  Okay.  Do you see how that works?  All right.  And as I say, that question in – the third question in the second column’s almost the same as the intention question in the first column.  So I am certainly not going to go through all that evidence again, but it is the same question really except that the question in the second column, the time you have to be satisfied – and this is very important – is the time the gun discharged.  Okay.  So that is the time you are looking at to find an intention.  So it might just be split seconds after, but it is after the cocking of the gun.”[45]

“Chapter 27Duties relating to the preservation of human life

289Duty of persons in charge of dangerous things

It is the duty of every person who has in the person’s charge or under the person’s control anything, whether living or inanimate, and whether moving or stationary, of such a nature that, in the absence of care or precaution in its use or management, the life, safety, or health, of any person may be endangered, to use reasonable care and take reasonable precautions to avoid such danger, and the person is held to have caused any consequences which result to the life or health of any person by reason of any omission to perform that duty.”

It is unlawful to kill any person unless such killing is authorised or justified or excused by law.

Except as hereinafter set forth, any person who causes the death of another, directly or indirectly, by any means whatever, is deemed to have killed that other person.

Any person who unlawfully kills another is guilty of a crime, which is called murder or manslaughter, according to the circumstances of the case.

is guilty of murder.

A person who unlawfully kills another under such circumstances as not to constitute murder is guilty of manslaughter.

The appellant’s contentions on ground 1

“permitting a person to be convicted of murder simply for an act done with reckless indifference to human life or done in an attempt to commit or during or immediately after the commission of an act obviously dangerous to human life.  Thus, if the act causing death in this case were to be identified as simply presenting the loaded shotgun, that might constitute manslaughter by negligent act, but it would not constitute murder.”[47]

The respondent’s contentions on ground 1

“…a consideration of manslaughter will often be required when s 23(1) of the Code is invoked.  The opening words of s 23(1), with their cross-reference to ‘express provisions of this Code relating to negligent acts and omissions,’ makes this inevitable.  If such other provisions apply, the total exemption from criminal responsibility provided by s 23 does not operate.  Moreover, the references in s 23(1) to acts and omissions occurring independently of the exercise of the person’s will…direct the mind to the possibility of manslaughter by criminal negligence.”[61]

The appellant’s contentions on ground 2

The respondent’s contentions in ground 2

The relevant provisions of the Justices Act

(6A)If a written statement is admitted as evidence … the statement–

“The rule marches in tandem with the related principle that when a witness has been cross-examined as to part of a written or oral statement made by him, examining counsel becomes entitled to prove in re-examination such other parts of the statement as are necessary to explain or qualify it; Meredith v Innes (1930) 31 SR (NSW) 104 at 112; 48 WN 5 at 6-7”.[75]

“289Duty of persons in charge of dangerous things

It is the duty of every person who has in the person's charge or under the person's control anything, whether living or inanimate, and whether moving or stationary, of such a nature that, in the absence of care or precaution in its use or management, the life, safety, or health, of any person may be endangered, to use reasonable care and take reasonable precautions to avoid such danger, and the person is held to have caused any consequences which result to the life or health of any person by reason of any omission to perform that duty.” (emphasis added)

If the consequence of the breach of duty is death, then the person is held to have caused that death by reason of any omission to perform the duty.[77]

Relevance of s 23 of the Criminal Code

“(1)Subject to the express provisions of this Code relating to negligent acts and omissions, a person is not criminally responsible for—

Is there a conceptual problem with murder via s 289?

Relevance of Murray v The Queen

[77] There is no exception in s 289 where the consequence of death is caused to a person by reason of an omission to perform the duty imposed by the section.

[80] This section is said to be applicable “[e]xcept as hereinafter set forth”.  That phrase refers to sections of the Code dealing with killing as a result of provocation under s 304, diminished responsibility under s 304A and killing for preservation in an abusive domestic relationship under s 304B.  None of those sections is relevant to this case.

[81] As her Honour did at AB477 l39 – AB478 l7.  She had already directed the jury that, as particularised, the relevant act was the causing of the gun to discharge and that, on the evidence, the discharge might have been effectuated as a willed act by pulling the trigger of the gun fully cocked or, in the case of a person who knew of the gun’s “peculiarities and faults”, by pulling the hammer back until it was almost fully cocked and then letting it go: AB456 ll30-37.  This latter direction is uncontentious.

[85] For a detailed discussion of the state of the civil law regarding intentional negligence see Peter Handford, ‘Intentional Negligence: A Contradiction in Terms?’ (2010) 32 Sydney Law Review 29.