Gregory v The Commissioner of Police
[2019] QDC 36
To print this judgment please return to the case and click on the PDF icon next to the case name. For court use, a full PDF copy is required or preferred.
Authorised Reports & Unreported Judgments

The evidence given at trial

The nature of the appeal

The offences of which the appellant was convicted

62Giving way when turning at intersection with traffic lights 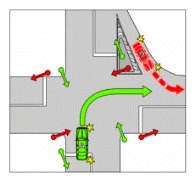 In example 3, vehicle B must give way to vehicle A.[4]

287 Duties of a driver involved in a crash

required particulars, for a driver involved in a crash, means—

required time, for a driver involved in a crash, means as soon as possible but, except in exceptional circumstances, within 24 hours after the crash.[5]

[4] Transport Operations (Road Use Management – Road Rules) Regulations 2009 (Qld). A vehicle is defined in rule 15 of the Regulations to include a bicycle.