F A Pidgeon & Son Pty Ltd v Valuer-General
[2019] QLC 26
To print this judgment please return to the case and click on the PDF icon next to the case name. For court use, a full PDF copy is required or preferred.
Authorised Reports & Unreported Judgments 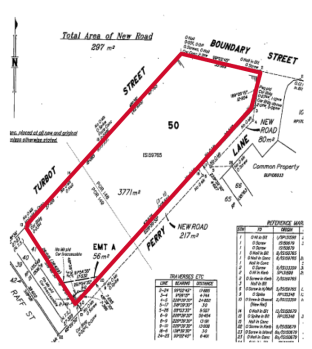 A different approach to this decision compared to the linked decisions 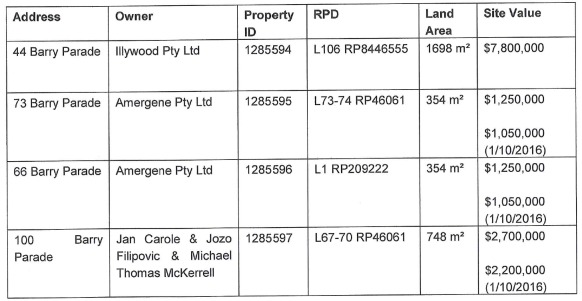 “MR TRAVES:   And Mr Jackson’s point at paragraph 51, and can I suggest to you it’s logical, is that in respect of the different development potentials for Barry Parade and for 357 Turbot Street, it’s appropriate to make the same allowance.  Do you agree with that, Mr Hart?

MR TRAVES:   And do you agree that 10 per cent is appropriate?

“MR TRAVES:   All right.  Now, can I come to 60 – sorry – can I come to Barry Parade for a moment and ask you this:  last – yesterday, you agreed with me that in respect of – let me come back.  The biggest difference on the reports, between you and Mr Jackson about Barry Parade and its comparison with 375 Turbot Street, was the development potential of 375 Turbot Street, which was the product of the different planning scheme provisions.  That was the biggest difference between you two?

MR TRAVES:   And then there were some differences which, can I suggest, were relatively – in relative terms – relatively minor.  For example, there was the issue about the impact of the rail easement on the north western corner.  And there was one or two – that’s one of them, wasn’t it?

MR TRAVES:   And you’d agree with me, in fairness, relatively of much lesser importance than the development potential issue?

MR TRAVES:   And then there were a couple of others.  Can you remind me what they were – the other little adjustments you thought necessary.

MR HART:         the orientation, the size and location I think was another.

MR TRAVES:   Okay.  All right.  Now, having – yesterday you agreed with the question that I asked you, that the relevant adjustment for development potential was 10 per cent.  Do you remember that?

MR TRAVES:   Now, the rest of the adjustments, can I suggest, are the sort of adjustments that a valuer of your experience, and in your role, would comfortably make every day of the week – shape, size, an easement over a corner – all things, Mr Hart

MR TRAVES:         as one of the senior valuers in the Valuer-General’s engagement, you would make every day of the week.

MR TRAVES:   Correct?  So, really, I suggest to you that there’s nothing left as to why you wouldn’t sensibly compare Barry Parade to 375 Turbot Street.  Having been able to make those adjustments, then there’s – nothing stands in the way of a sensible comparison being made between the two properties.  Do you agree with that?

MR TRAVES:   All right.  So if nothing stands in the way of there being a sensible comparison between the two properties, this property being located across the road from 375 Turbot Street, and being of an almost identical size, or a very close size, surely is the best sale.

MR HART:   Well, I – there – yeah, they’re obviously – if you were just to look at that issue of location and size, it would – it would be the best site.  But there are

MR TRAVES:   Now, given those things, I put to you that, plainly, now that we’ve been informed of all of those things – it might not have been the view you originally took, but plainly, Barry Parade is the best and most useful sale.  Plainly.

“MR FYNES-CLINTON:   Just a couple of matters for clarification hopefully.  Mr Hart, some questions were put to you about the proposition that comparing Barry Parade to 375 Turbot Street an allowance of 10 per cent for development potential difference might be appropriate.  Do you recall those?

MR FYNES-CLINTON:   And I think your answer to my learned friend was in the affirmative.

MR FYNES-CLINTON:   I – all right.  Mr Hart, do you see any inconsistency between the answers you gave to my learned friend about a 10 per cent differential in development potential between Barry Parade and 375 Turbot and the difference that remains between you and Mr Jackson about the appropriate rate to apply [indistinct] MR HART:   No, I don’t believe so.

MR FYNES-CLINTON:   All right.  Well, now that may require some explanation.  Can you tell the court why you don’t believe so?

MR HART:   Well, I think it’s just about those adjustments up from that $6500 a square metre, and if you were to – we put the figure on the 10 per cent for the development potential.  But I think – so that’s an addon to the six and a half.  I think it’s – the subject property is in a superior location.  It’s got that CBD address.  Again, when you’re marketing your site

MR FYNES-CLINTON:   Your valuation report and your evidence remains $9000 per square metre.

MR FYNES-CLINTON:   Agreed?  And you were asked some questions to which you gave some answers which included a statement by you that is on the record

MR FYNES-CLINTON:         that you consider an adjustment between the two properties of 10 per cent for development potential to be appropriate.

MR FYNES-CLINTON:   So [indistinct] all that.

MR FYNES-CLINTON:   And my question to you is to clarify for both the parties and the court whether you regard there being any inconsistency between, on the one hand, your value of 9000 and Mr Jackson’s value of 6500;  and what you’ve said to the court about a 10 per cent differential for development potential.

MR HART:   I don’t think there is any inconsistency.  I maintain

MR FYNES-CLINTON:   I’m at somewhat of a dilemma because I’ve asked the question – and I don’t mean to be glib or disrespectful, but, Mr Hart, I’m going to ask my question again and then I will ask a couple more.  You’ve got my question three times now.

MR HART:   The only inconsistency I can see is the adoption of a – the 10 per cent amount, but I have – I have maintained that the development potential on the subject  property is better than the sale property.  So it’s not inconsistent in that – in that regard.

Mr Hart, can you give a one-sentence summary – and we will see if this gets through the net or not – of your response to my question about inconsistent between the 10 per cent and the answers you gave to my learned friend and the differential between your two valuations?

“And to the extent it becomes relevant, neither can Mr Hart  - if he made a "concession" in that regard, he did so towards the end of a gruelling trial and, on the objective facts, he was wrong.”

“We have elsewhere dealt with the relative similarity between the intensity of the development between the sale and the subject. It is clear that it is the market, and not the merely permissive planning scheme, which most influences development potential. Indeed, in paragraph 113 of the Respondent’s Submissions, it is accepted that the density or impact of the development on the sale property is comparable to what might reasonably be anticipated on the subject property, albeit in a different configuration. That follows from the evidence of the planners and the valuers who agreed that a development in the order of 40 storeys on the subject site was in the order of likely development (T8-115 L 10-26).”

MEMBER OF THE LAND COURT

[11]  See respondent’s written submissions [108] and, in particular, the submissions which follow it.