Deimel v Phelps & Anor
[2019] QLC 4
To print this judgment please return to the case and click on the PDF icon next to the case name. For court use, a full PDF copy is required or preferred.
Authorised Reports & Unreported Judgments

281 Determination of compensation by Land Court

as a consequence of the grant or renewal of the mining lease; and

as a consequence of the grant or renewal of the mining lease.

“It is well recognised that where damage by way of severance or injurious affection is involved the assessment of compensation may be made on a “before” and “after” method of valuation of the property in which the cumulative effect is reflected in the “after” valuation or alternatively by the summation or piecemeal assessment of all relevant effects… The section in my opinion merely identifies matters which shall be taken into consideration in making the assessment. It does not prescribe a method of valuation. No doubt each case will depend on its own facts and circumstances but it seems to me that either method is open to the valuer.”[1]

“…the method of assessment remains a matter which will be governed by the facts and circumstances of each case in which event emphasis may shift from one method to another.”[2]

compensatable effect means all or any of the following—

an ADR or conference

The compensation positions of the parties

“On evidence presented and past precedents set, compensation should only be set at production loss over 10 hectares.

“On evidence presented and past precedents set, compensation should be: 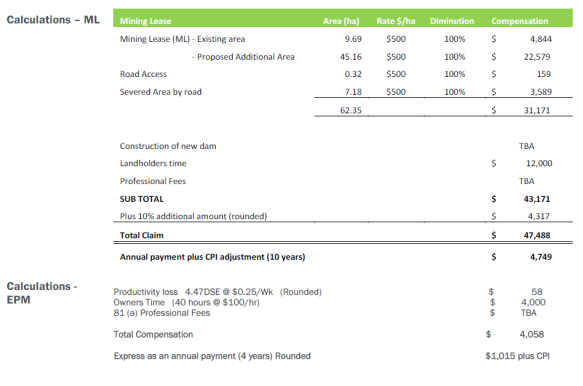 No allowance has been made for drought conditions experienced over the past 10 years.”[11]

403 Offences regarding land subject to mining claim or mining lease

This provision is an executive liability provision—see section 412A.

“[25] In my opinion, the landowner is entitled to be compensated for the loss of control over the mining lease area as evidenced, for example, by the fact that the mining area may shift from time to time to various parts of the lease without the consent of the landowner. Further, the lease may be regarded as an encumbrance or blot on title so that the applicant's land with the lease in place is worth less than it would be if unencumbered by the lease.

“[25] …It could also be inferred from s. 403(1) that the holder has the right to exclude the landowner from the lease area. Relevantly, that section provides that it is an offence to enter, use or occupy the surface area of a mining lease. It is a defence if the person is the owner or is authorised by the owner and the person has the consent of the holder of the mining lease.

[26] Whilst it is unnecessary for me to determine this issue in order to determine compensation, it is my view that this section does not confer exclusive rights to possession upon the holder of the mining lease. Section 403(1) has to be interpreted in the light of the purpose of the Act and of other relevant provisions, including s. 235. I do not accept that s. 403 confers on the holder of the mining lease unfettered power to withhold consent.

[27] Nevertheless, I consider a hypothetical prudent purchaser would regard the lease as effectively depriving the landowners of possession of the surface of the land, even though their stock may from time to time graze on that area.” (citations omitted)

Conclusions on diminution for MLA 100140

“…I would think it is, you know, any landowner’s responsibility that they would want to see what impact potentially to the mine site and outside that area may create on their business operation so to just answer your question, Mr Deimel, looking at previous case law where the landowners have had the same issues where they would want to inspect various mining sites, depending on the size of the impact, will vary, and I guess we’ve taken an approach that Mr Phelps would take a monthly inspection once a month, and, as you stated, what we’ve included is that travel time.  From basically as you enter the property to get up to the mining site, we’ve only allowed an hour.  I think it took us roughly about 20 minutes just to go direct from the house site by the road to the mining lease, so I think the hour is fair and reasonable.”[18]

Determination of compensation  for MLA 100140

Compensation for advanced activities on EPM 25185

Respondents time as regards each costean

MEMBER OF THE LAND COURT

[20]  The travel distance from the Homestead to the ML in Valantine v Henry was significantly greater thus resulting in two hours per inspection being allowed in that case.