Serratore v Noosa Shire Council
[2021] QPEC 21
To print this judgment please return to the case and click on the PDF icon next to the case name. For court use, a full PDF copy is required or preferred.

PLANNING AND ENVIRONMENT COURT OF QUEENSLAND

“What had been created is a mosaic of land management zones. The principles of mosaic burning have long been recognized as a means of most sensitively introducing planned and managed fire into the landscape. In many ways mosaic burning is similar to traditional aboriginal methods of burning (firestick farming) where small patches are burnt at a time when fire intensity is low and can readily be contained. In the same way as firestick farming, mosaic burning allows fauna and invertebrates to escape from a smaller burn area much more easily than where large areas are burnt. Following the burn it is also easier and quicker for recolonization to occur by both flora and fauna…

A mosaic of land management units now exists that enable managed fire on the Subject Lot, which would not have been possible otherwise…”

“Council is issuing an Enforcement Notice to you under the provisions of Section 168 of the Planning Act 2016. A Show Cause Notice has not been issued as Council reasonably believes the giving of a Show Cause Notice would be inappropriate in the circumstances due to the serious nature of the breaches identified below.”

“Council reasonable [sic] believes that an Enforcement Notice should be given to you because you have committed or are committing an offence pursuant to Section 168 of the Planning Act 2016 and in breach of the Noosa Plan.

Satellite imagery…[over the land]… shows that extensive clearing of vegetation has taken place. Under the Noosa Plan, this clearing constitutes assessable development and is unlawful unless a Development Permit for Operational Works (clearing vegetation) has been obtained.

Therefore, the vegetation clearing has been undertaken in breach of the Noosa Plan and the Planning Act 2016.”

2. Suitably stabilise the site to prevent movement of soils from the disturbed areas;

3. Lodge an application for a Development Permit for Operational Works to reinstate removed vegetation;

4. Undertake rehabilitation of the area cleared of vegetation.

The disputed issues to be determined

The enforcement notices given to Teresa, Michela, Priscilla and Frank Serratore

Are the remaining enforcement notices defective?

“163 Carrying out assessable development without permit

(b) in accordance with an exemption certificate under section 46; or

“It is an offence under Section 163 of the Planning Act 2016 to carry out assessable development unless there is an effective Development Permit for such clearing.”

“What part is about

This part creates offences (each a development offence), subject to any exemptions under this part or to chapter 7, part 1 or section 275L.”

(a) the enforcement authority; and

(b) a person who must be given notice of the activity under another Act.”

(a) the development may be carried out under the superseded planning scheme; and” (emphasis added)

“However, despite the lapsing of the development approval, any security paid under a condition stated in section 65(2)(e) may be used as stated in the approval or agreement under section 67 (to finish the development, for example).”

Has a development offence been committed?

“operational work means work, other than building work or plumbing or drainage work, in, on, over or under premises that materially affects premises or the use of premises.”

a) clearing which is a property maintenance activity;

b) clearing which is reasonably necessary for emergency access or work or is immediately required in response to an accident or emergency;

h) clearing on a category 3…lot greater than ten (10) hectares in area, where –

i. the vegetation is within 30 metres of a building or within ten (10) metres of a structure; and

ii. the clearing is reasonably necessary for the control of fire risk to the building or structure; and…”

a) construction and maintenance of a farm track, fence and shed on site

b) maintenance of crops

i) removal of exotic weed

k) any other maintenance activity specified in a property vegetation management plan.”

“reasonably necessary means vegetation clearing for a particular purpose where there is no alternative way of achieving the purpose that is prudent and feasible and that would avoid clearing or significantly reduce the extent of vegetation clearing.”

What orders should be made disposing of the appeal? 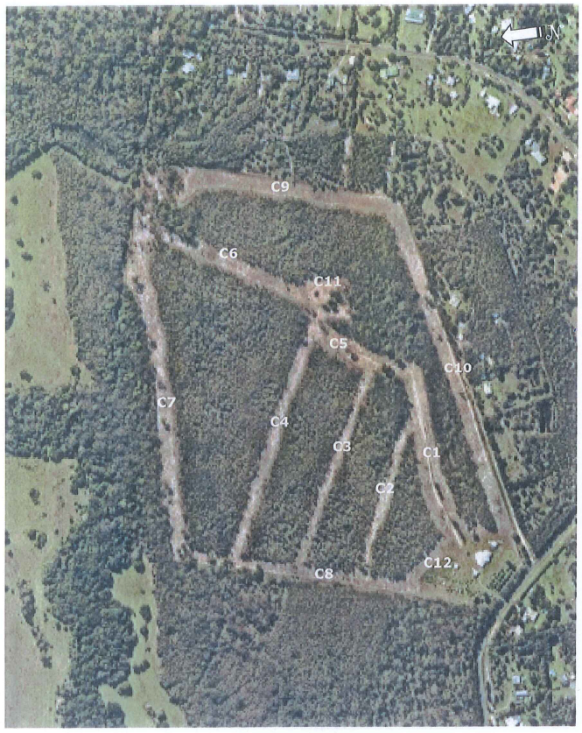 [17]  This distance was intended to take into account the height of existing trees and widths of canopies.

[25]  Either as a principal offender, or party to the offence.

[35]  Which must be made available for public inspection – see Schedule 22 of the Planning Regulation 2017.

[36]  Both the conditions, and any agreement need to be available for public inspection as required by Schedule 22 of the Planning Regulation 2017. Further, the documents would need to form part of a standard planning and development certificate for the land, if requested: s 265 of the PA and s 71 and Schedule 23, item 2, para (1)(a) and (j) of the Planning Regulation 2017.

[49]  Which is admitted at paragraph 3 of the Second Further Amended Notice of Appeal (Ex.1, Tab 7).

[55]  Affidavit of A R Hill, exhibit ARH-1, p.36, Table 7 – The table contains evidence of Mr Hill and Mr Friend. Where there is a difference with respect to average widths, I have preferred Mr Hill’s evidence because he, unlike Mr Friend, was able to undertake onsite measurements.

[56]  It was also intended to protect existing electricity infrastructure in the southern part of C10.