AAGT Private Loans Pty Ltd v Ferguson
[2009] QSC 113
To print this judgment please return to the case and click on the PDF icon next to the case name. For court use, a full PDF copy is required or preferred.
Authorised Reports & Unreported Judgments

That documentation was signed by all the borrowers on 30 April 2008.  A Form 2, mortgage number 711703347, between AAGT and the Fergusons, securing the loan over the land which was the site of the Development, was executed on 30 April 2008 and was registered by Hartwell Lawyers on 5 June 2008.  That document referred to the Mortgage Memorandum as containing the standard terms.

Orders sought by the plaintiff

The letter of offer

“…from my memory, the management of the Jheeta home loans was suffering - they were in default, they were in arrears.  Representations from Bob Pierce were that development approvals were coming through any day on the site.

Rob Ferguson was telling me the same thing.  Both parties were also telling me that they had re-finance coming through from their finance broker, Solutions Finance, any day.” 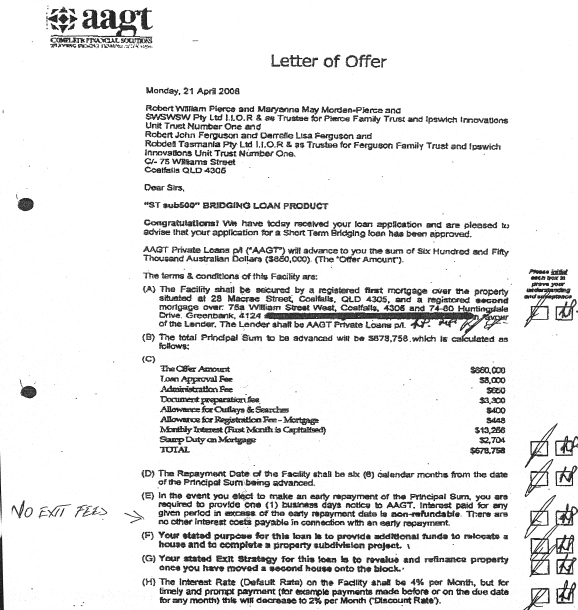 “(F)Your stated purpose for this loan is to provide additional funds to relocate a house and to complete a property subdivision project;

(I)We confirm & acknowledge that we are entering into this bridging loan agreement on the express understanding that AAGT and its associated entities, in particular Aaron Tait Mortgage Finance p/l, have NOT promised, guaranteed or implied in any way or manner that they can or will obtain a successful refinance for me/us.”[6]

The misleading and deceptive conduct argument

(1)A corporation shall not, in trade or commerce, engage in conduct that is misleading or deceptive or is likely to mislead or deceive.

(2)Nothing in the succeeding provisions of this Division shall be taken as limiting by implication the generality of subsection (1).”

(1)A corporation must not, in trade or commerce, engage in conduct that is unconscionable within the meaning of the unwritten law, from time to time, of the States and Territories.”

(1)A person must not, in trade or commerce, in connection with the supply or possible supply of financial services to a person, engage in conduct that is, in all the circumstances, unconscionable.

(a)the relative strengths of the bargaining positions of the supplier and the consumer; and

(b)whether, as a result of conduct engaged in by the supplier, the consumer was required to comply with conditions that were not reasonably necessary for the protection of the legitimate interests of the supplier; and

(c)whether the consumer was able to understand any documents relating to the supply or possible supply of the services; and

(e)the amount for which, and the circumstances under which, the consumer could have acquired identical or equivalent services from a person other than the supplier.

(3)A person is not taken for the purposes of this section to engage in unconscionable conduct in connection with the supply or possible supply of financial services to another person merely because the person:

(a)institutes legal proceedings in relation to that supply or possible supply; or

(b)refers a dispute or claim in relation to that supply or possible supply to arbitration.

(4)For the purpose of determining whether a person has contravened subsection (1) in connection with the supply or possible supply of financial services to another person:

(a)the court must not have regard to any circumstances that were not reasonably foreseeable at the time of the alleged contravention; and

(b)the court may have regard to conduct engaged in, or circumstances existing, before the commencement of this section.

(1)He registered the power of attorney, in circumstances where the provisions of the Memorandum to the Mortgage were designed to exclude the operation of statute law and were intended solely for the benefit of Mr Thompson as attorney, rather than the defendants as principals.

(2)The exercise of his powers, under the power of attorney, to register a mortgage over property, which he specifically knew had been excluded by the principals, was a breach of his fiduciary duties and his statutory obligations to act in the best interests of the principals.

The evidence of Mr Ferguson

“A transaction will be unconscientious within the meaning of the relevant equitable principles only if the party seeking to enforce the transaction has taken unfair advantage of his superior bargaining power, or of the position of disadvantage in which the other party was placed.  The principle of equity applies “whenever one party to a transaction is at a special disadvantage in dealing with the other party because illness, ignorance, inexperience, impaired faculties, financial need or other circumstances affecting his ability to conserve his own interests and the other party unconscientiously takes advantage of the opportunity thus placed in his hands”: Blomley v Ryan per Kitto J.

The oral representation in relation to finance

“The agreement was - because the AAGT loan was, in effect, to refinance their existing first mortgagee, Ascent loans, as well as Jheeta, the borrowers, Pierce and Ferguson, represented to me that the payout figure was X dollars for Ascent homes.  When we came to settle it transpired that the payout figure I was advised by Bob Pierce was in fact about $14,000 shortfall.  In addition to that, there were other rates that needed to be paid and other costs and sundries that he didn’t account for.  That resulted in a shortfall in the AAGT refinance of some $40,000.  So what I did wearing my Jheeta hat was I agreed to accept - to allow settlement proceed on the basis that Jheeta Homes and the borrowers entered into an arrangement such that the $40,000 was still owed by them to Jheeta but we put – they negotiated a clause in there saying if they paid that loan back within the next two months the outstanding amount of 40,000 would be halved to 20,000.  Additionally, if they paid the loan out within the first two months there would be no interest charged at all.  So basically Jheeta was saying, ‘Well, look, you owe me 40,000.  We'll give you two months to pay, interest-free, and if you do pay it in two months we'll halve it to 20,000’.  And if I can just say, the two month period was negotiated by them because Bob Pierce was representing to me that, ‘Oh, by then we'll vary the development approval and, of course, the refinance, so there would be plenty of money to repay everyone’.”

The letter of offer representation

“Bob Pierce informed him that Rob Ferguson was not happy having his owner/occupier property as security.  I informed Michael to advise Mr Pierce that in the circumstances it would be okay for him to cross out that security property and just initial the change.  I believe that Michael Spencer then rang Bob Pierce and that this is a result of that conversation.”[26] 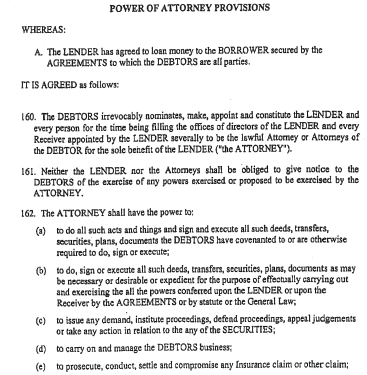 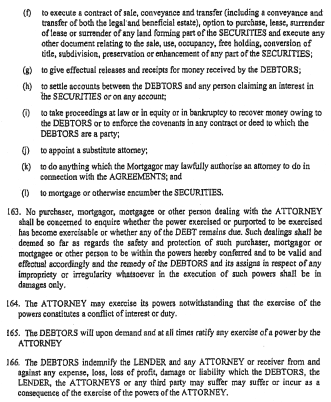 “The parol evidence rule, the limited operation of the defence of non est factum and the development of the equitable remedy of rectification all proceed from the premise that a party executing a written agreement is bound by it.”[32] Has there been a breach of fiduciary duty by the attorney?

“Mr Thompson’s exercise of powers under those Powers of Attorney to register a mortgage over the Defendants’ home’ was a ‘breach of his fiduciary duties and statutory obligations’ in that:

“Powers of attorney are strictly construed, and an act of an attorney outside the scope of the authority granted by a power of attorney is ultra vires and void.  An attorney’s use of a power of attorney contrary to the known wishes and directions of the donor is a breach of trust.  In Powell v Thompson [[1991] 1 NZLR 597 at 605], Thomas J said –

‘Powers of attorney are specifically directed at the management of the principle’s affairs; it is not open to attorneys to either obtain an advantage for themselves or to act in a way which is contrary to the interests of their principals.’”

“(2)Despite chapter 2, part 3, a power of attorney given as security is incapable of revocation except with the consent of the attorney while –

(b)the obligation, the performance of which is secured by the power of attorney, remains undischarged.

(6)The power of a registered proprietor under the Land Title Act 1994 to revoke a power of attorney is subject to this section.”